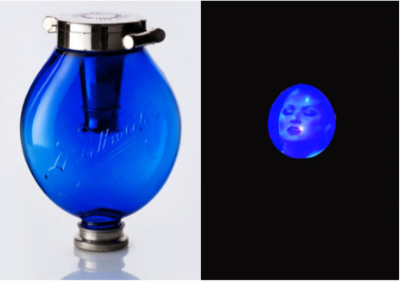 “Blue henry”, that’s how people used to call this forgotten beautiful little sputum, which was sold more than half a million times when tuberculosis reached its peak at the end of the 18th century. Today, the sputum has lost its function, became a collectible and in the context of my installation can sorely focus on its beauty. At the same time, the Blue Henry is a statement, a silent observer of a glorifying LED-balloon installation. The third aspect, which is perceived acoustically, highlights the importance of tuberculosis in the first realistic operas of the 18th century. In Verdi’s La Traviata, as well as in Puccini’s La Bohème, the female main character dies of tuberculosis.